LATIMES: This Democrat's Decision on Climate Change Could be a Game Changer

THIS DEMOCRAT'S DECISION ON CLIMATE CHANGE COULD BE A GAME CHANGER

Henry T. Perea was having a change of heart.

For years, the Democratic assemblyman had griped about the Central Valley getting shortchanged by Sacramento and overshadowed by Los Angeles, San Francisco and other big-city magnets for state dollars.

Now he was in a poor Fresno neighborhood, not far from where he grew up, standing in front of a constituent's home with newly installed rooftop solar panels — paid for by a program he had publicly assailed.

Perea had defied party leadership in a bid to stall a pivotal component of the cap-and-trade program, which assesses fees on California polluters in an effort to reduce greenhouse gas emissions. 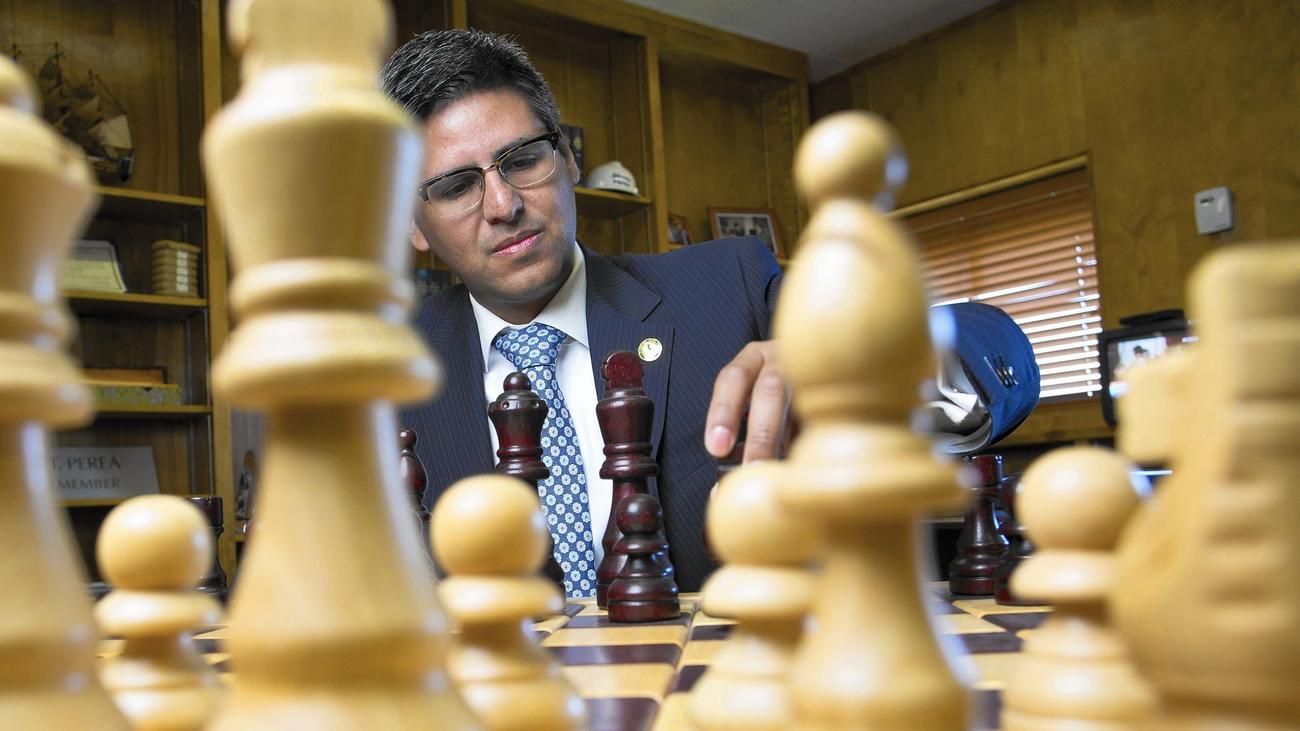 Assemblyman Henry T. Perea sums up his philosophy with a maxim picked up from a Harvard professor: “True political leadership is the ability to disappoint your friends at a rate that they can absorb.” (Tomas Ovalle)

But here he was at a news conference staged in front of the new solar panels. Behind him on this spring day, state Senate Leader Kevin De León (D-Los Angeles), one of the party's most ardent climate advocates, clapped with glee as Perea told onlookers, "You're turning me from a skeptic to a supporter."

The depth of Perea's conversion may determine the fate of the sweeping climate-change package being championed by Gov. Jerry Brown and De León, policies designed to change the cars Californians drive and the sources of power that keep their lights on and air conditioners humming.

Their steepest hurdle is not the climate-change deniers that Brown dismisses as "troglodytes," or even skeptical Republicans whose minority-party status has relegated them to the political sidelines.

It is a pack of moderate Democrats in the Legislature. And the most public face of that opposition is Perea, their leader.

Perea likes to quote a maxim picked up from a professor at Harvard University, where he once took a leadership course, to sum up his political philosophy:

"True political leadership is the ability to disappoint your friends at a rate that they can absorb."

Perea has spent practically his whole life in his district, which includes a chunk of Fresno plus seemingly endless stretches of farmland. On a clear day, you can see the Sierra in the distance — if the peaks are not masked by the brown haze born of the worst air quality in the nation.

His political life began early, back when his father, Henry R. Perea, a fixture of Fresno politics who currently serves on the county board of supervisors, would drag him around precincts. 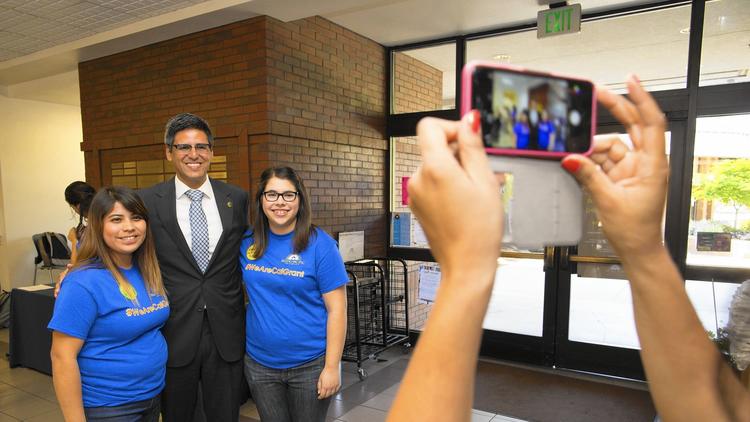 Assemblyman Henry T. Perea, who has spent practically his whole life in his district, is photographed with students Karina Reyes, left, and Janet Salcedo at Fresno Pacific University.

(Tomas Ovalle / For The Times)

He started to actually like politics during a college internship in Washington with then-Rep. Cal Dooley, a moderate "New Democrat" from Visalia. When he returned to Fresno, Perea began a rapid climb in local government: succeeding his father on the City Council at age 25, launching an unsuccessful bid for mayor at 31 in a race against Republican Ashley Swearengin and, five years ago, winning his Assembly seat at 33.

Perea makes the rounds in his broken-in Ford Explorer, with child-safety seats strapped in the back when he has to pick up his kids, ages 5 and 2, from day care.

He displays a politician's knack for knowing his audience. At an elementary school event honoring veterans, he rouses distracted students by directing them to wave at the news cameras. At a visit with union construction workers, he talks of how the Teamsters helped organize his grandmother, a local cannery worker. At a farm where a new venture is aimed at converting sugar beets to ethanol, he indulges in a bit of soap-boxery about whether the valley gets enough money for green-energy projects.

But on weekends, he prefers to be home with his wife, Yahaira, and the kids and their assorted mutts.

Perea knows how to work that floor. He makes few speeches but is in constant motion, checking in with colleagues, slapping backs and tallying votes. Rangy and younger-looking than his 38 years, despite his graying hair, he navigates the chamber in hipster square-frame glasses and nattily tailored suits.

He clearly loves being in the mix on high-profile issues, and the laws he has successfully proposed reflect that: a revamp of how utilities can charge for electricity, a crackdown on workers' compensation claims by out-of-state professional athletes, extended funding for incentives for hybrid and electric vehicles. 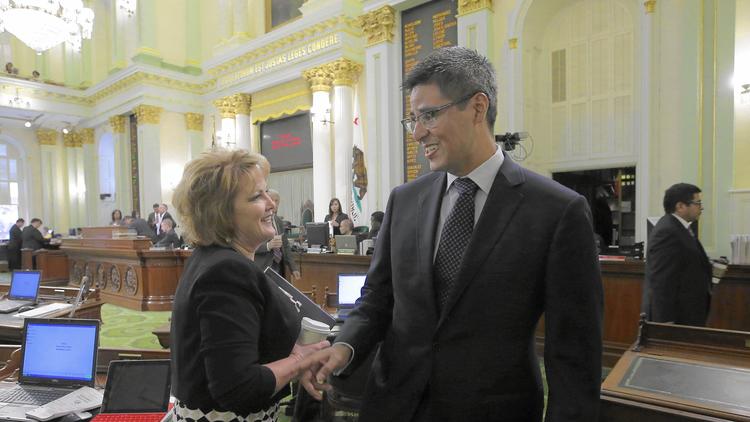 For three years, Perea has been the head of a crucial bloc of swing votes. The coalition is loosely affiliated but growing in ranks — not just in places like the Central Valley, where fiscally conservative "valleycrats" have long bucked party leadership, but also in the suburbs of Los Angeles and on the outskirts of the Bay Area.

These Democrats mostly toe the party line on social issues, such as support for gay rights and expanded benefits for immigrants. But when it comes to money matters, they tend to side with business interests over typical Democratic allies such as public-sector unions, consumer lawyers and environmentalists.

They shot down efforts to ban the controversial oil extraction technique known as fracking and crafted compromise regulations instead. They decisively defeated a bill this year that would have required companies to pay their employees double on Thanksgiving.

Environmental groups, particularly those from the valley, give him kudos for doggedly securing money for his district. But that appreciation is often tinged with wariness.

On climate, for instance, Veronica Garibay, a co-director of the Leadership Counsel for Justice and Accountability, said Perea has the opportunity to push for more funds for poor communities and support actions to clean up the air.

"He's proven his commitment on the former," Garibay said. "His constituents await his decision on the latter."

California's adoption of an open primary-election system, in which the top two vote-getters advance to the general election regardless of party except in presidential contests, has helped elevate moderate candidates who might otherwise be shunned by party stalwarts in the primaries. And business groups have made a tactical shift from trying to defeat Democrats to spending money on electing Democrats they like.

Since 2012, corporate interests have given nearly $6 million to an independent committee that strives to elect centrist Democrats. Perea leads the fundraising for the group, which can accept unlimited donations. Around 30% of that money — $1.8 million — has come from oil interests and utility companies, industries with a huge stake in the climate debate.

I believe we have to deal with the impacts of climate change. I also represent a population that just can't afford all of these things.- Assemblyman Henry T. Perea

That largess leads to a widely held perception in the Capitol that businesses hold sway over "the Mods." Perea, in particular, is seen as close to oil and agriculture, two dominant industries in the region.

He is aware of the reputation and sometimes brings it up unprompted, like when he squeezed in a reference to the California Chamber of Commerce CEO in a conversation about his favorite hobby, cooking.

"This probably won't help with me looking like an industry guy," he said, "but Allan Zaremberg gave me a great recipe for dough."

Perea says he doesn't doubt the science of climate change; he laughs when asked the question and says matter-of-factly he believes it is real.

Instead, he's painting the environmental rules in the climate-change package as fundamentally unfair: Perhaps affluent liberals on the coast can absorb higher electricity rates or pay a couple extra cents per gallon at the pump, but what about the burden on his rural, mainly Latino constituents?

"I believe we have to deal with the impacts of climate change," Perea said. "I also represent a population that just can't afford all of these things."

Backers of the package say the price increases that Perea cites are exaggerated and that poor communities, often those most harmed by air pollution, would benefit from clean energy, mass transit and housing projects that can be built with fees the program generates.

Right now, a significant portion of Democrats, mostly moderates, are withholding their support. Perea may not hold the keys to all of their votes, but he's become their most public spokesman. And he's not quite sure where they — and he — will end up.

"I want to say yes," Perea said. "I want to give people the opportunity to help me say yes. But I'm not going to just say yes for any bill because that's where the prevailing winds are going."

To get to yes, he has a few requests, among them: a scaling back of De León's proposal to slash gas use by half by 2030 — or giving the Legislature the final say on how it gets done.

The final weeks of this legislative session, which ends Sept. 11, are certain to be filled with horse-trading, false breakthroughs and tense negotiations.

But the fate of the climate-change package boils largely down to this: Which friends will Henry Perea decide to disappoint?